Is there anything in New York City worth photographing that has not already been photographed one million times, in at least one thousand different ways? Ok, yes I'm sure there is, but I'm not holding my breath that I will be the one to discover it. Thank heavens this is a family trip so I can just play tourist and take snapshots of our vacation instead of trying to do something original. I would love to live in New York for a while to see the details you miss as a tourist. But in the meantime, we visited and thoroughly enjoyed the usual tourist sites. We did a top down approach, so the first couple of days are here http://kingfishr.blogspot.se/2012/06/empire-state-vs-top-of-rock.html

99 degrees in the shade meant there were no arguments from any family members on visiting NYC's air-conditioned and wireless museums and galleries, although Johan and Kristina spent as much time looking at their iphones as they did the paintings. And when we left the museums we managed about 30 minutes on the street before being forced to take refuge in a Starbucks and reviving ourselves with an iced frappaccino. Starbucks shares rose during the beginning of the week and fell when we left New York. Now you know why.

Since we spent so much time in the art museums I had to include at least one picture, and "The Sleeping Gypsy" is a good analogy for our first trip to New York. Kind of a scary place where you could be mugged, pick-pocketed or eaten alive. And all that happens is the that big dangerous city gives you a sniff and ignores you, probably because you smell bad from spending all day in 99 degrees... 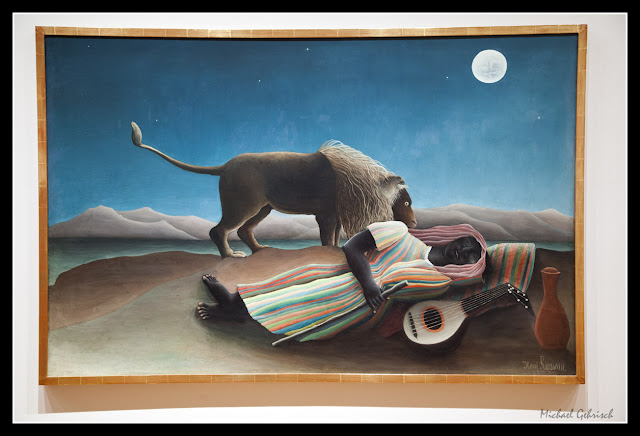 In Central Park the real New Yorkers did not seem to notice the heat. They bicycled, jogged, skated and ran without breaking a sweat. 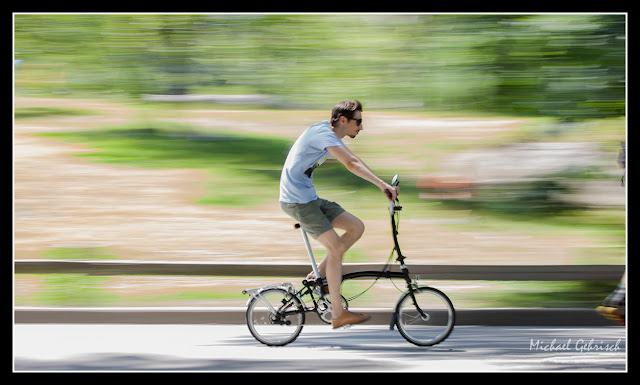 While the ladies shopped Johan and I headed for B&H Photo to pick up a new Lowepro camera backpack since the zipper on my five year old bag was broken. The new model of my old bag was now rain proof. This turned out to be exactly what I needed, since a couple of hours later Johan and I were out on the middle of the Brooklyn Bridge photographing when a downpour came in over us. But no worries with my new camera bag, we ran back to the Manhattan side of the bridge in the pouring rain and took the stairs under the bridge to wait for the deluge to end. A fellow photographer also stuck under the bridge with no camera bag at all was grateful for my B&H plastic bag so he could protect his camera as he also attempted to make his way back to the city. 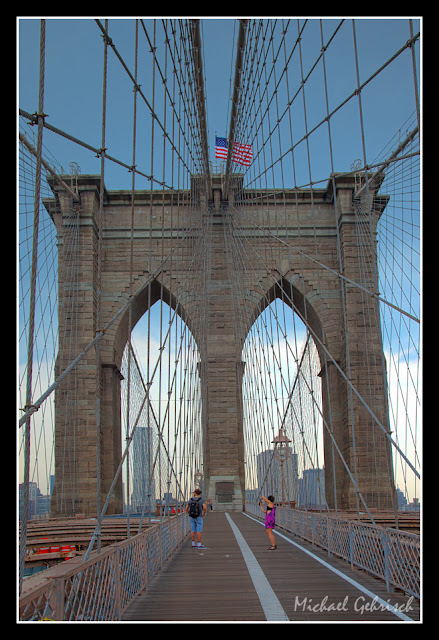 Later that day we crossed the Brooklyn Bridge once more accompanied by Lena and Kristina and enjoyed great Indian food at Baluchis Restaurant at Smith and Degraw St. This put us close to the Brooklyn Bridge Park for sunset photography of the bridge and Manhattan after dinner. And what a gorgeous sunset it was. We enjoyed every second of it as the four of us with overfull bellies tried to run down to the park before the sun set completely. We failed miserably. Tourists... 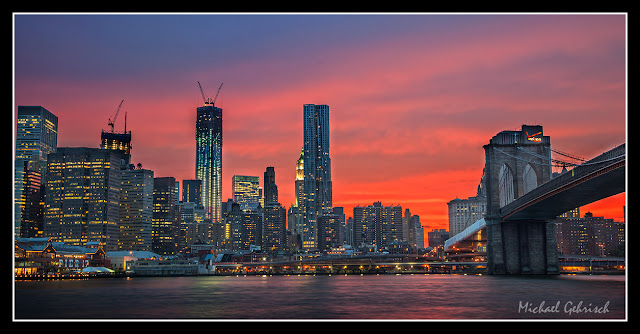 So we had to make due with the afterglow as the lights came on in Manhattan. 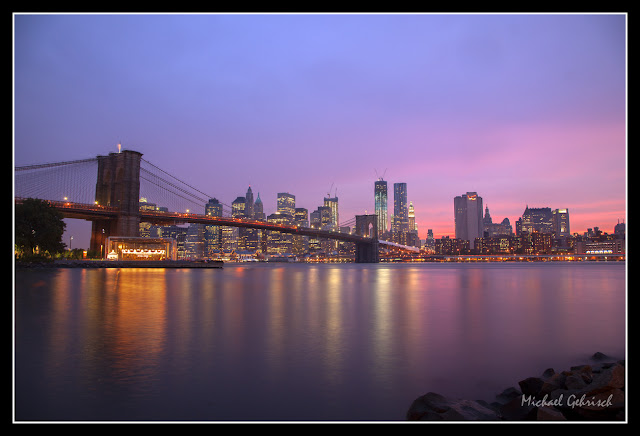 What can you say about the Stock Exchange. Profit or loss, life reduced to dollars and cents. Seems to be made for black and white. 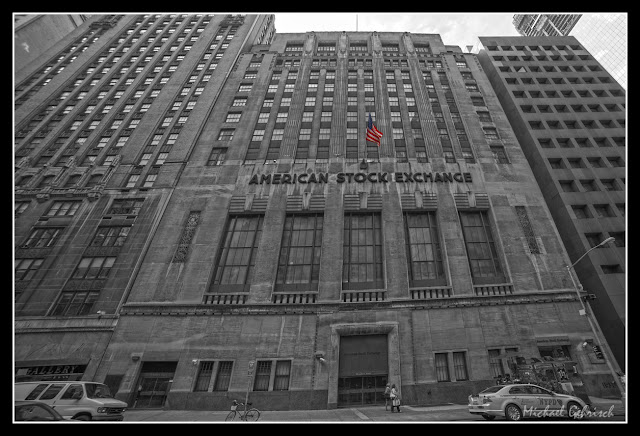 On the cruise out to Ellis Island we saw this reminder of what made America great. 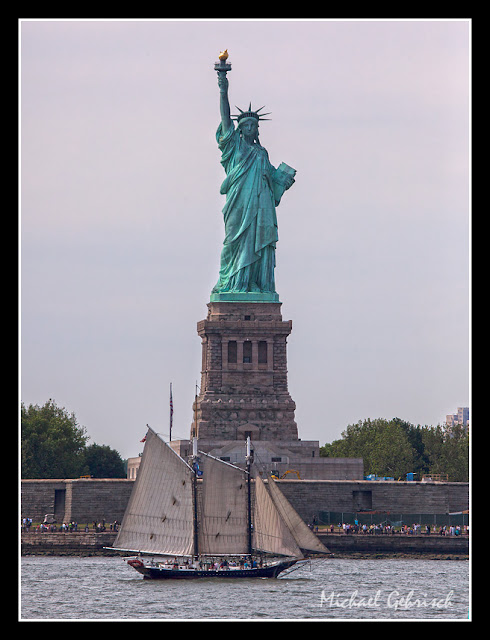 Ellis Island is now filled with rich tourists instead of poor immigrants. I suppose that could be considered progress. 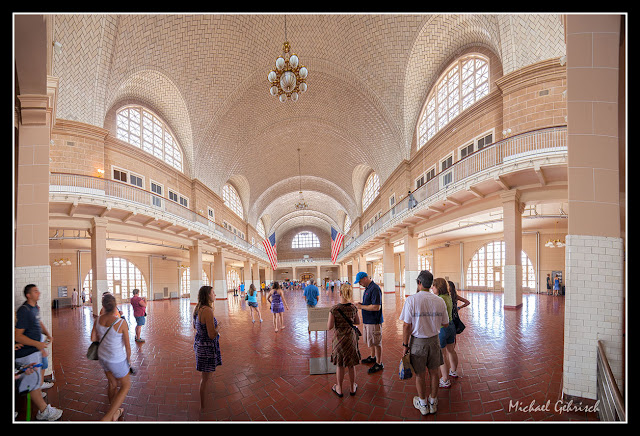 The trip back from Ellis Island. 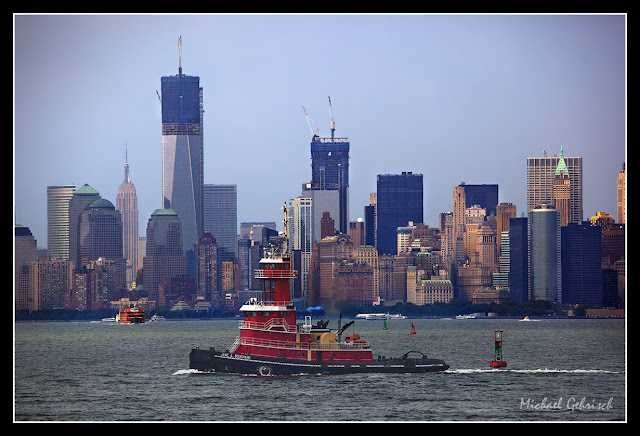 The image above is a good example of what proper use of Photoshop or similar tools can achieve on days with lots of haze. Below is a comparison of the in-camera JPEG, compared to the raw image and in the middle the processed image. With just a few minutes of work adjusting "Levels" and "Color Balance" the image went from being pretty ugly to being a decent snapshot. 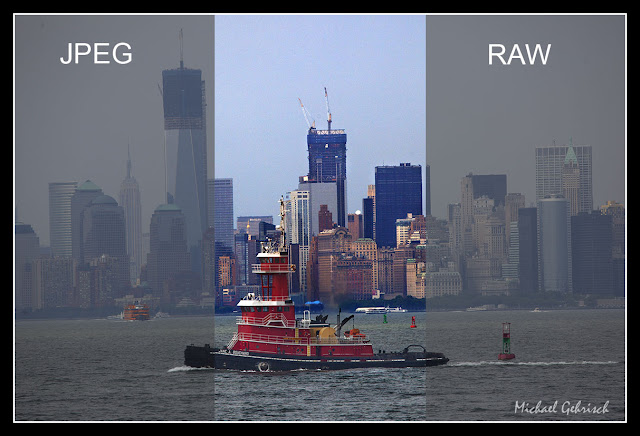 Always something happening on Broadway 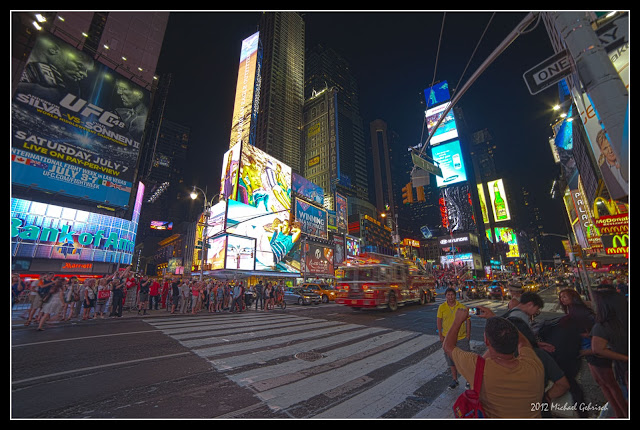 Just had to include this icon 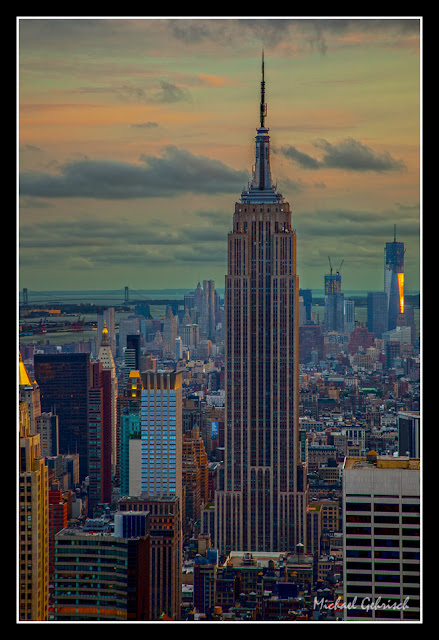 And now onward to the West Coast, where the temperature is a comfortable 75 degrees.
Posted by Unknown at 7:53 AM