The Sistine Chapel of Torna Hällestad...

Since moving to Sweden in 1987 on an exchange program with UCSD a favorite pastime has been exploring my new home country. To that end I have dragged my wife, children and in-laws to the arctic North in both February and June and most of the rest of the country in spring and summer when we have explored the back roads, small towns and nature and I can safely say I have seen a lot more of Sweden than most Swedes, who take this fantastic country for granted. So it was I was quite surprised when I discovered a new treasure only a short distance from our home.
On a recent March morning when the weather was poor and the wildlife had gone into hiding I gave up after a few hours and decided to head home on a back road that took me through Torna Hällestad (pop. 584). I have tried to photograph the church from outside but was never really impressed with the results, but on a whim I thought I would take a look inside and see if there was anything to photograph. Opening the door to the church was like stepping back in time to the middle ages. In 25 years of living in Sweden no Swede has even mentioned Tonra Hällestad to me, but I guess the grass is always greener...
In any case it is impressive; the architecture, the vaulted ceilings and most of all the paintings on the ceilings, which I later learned painted around 1460 by a Swedish artist named Nils Håkansson and called "Vittskövlemästaren" - "The Master of Vittskövle".
Trying to capture this interior however is a challenge; how do you present this in a way that reflects both the detail and the whole? The only option I could see was to shoot this as panormas about 20 shots using my favorite Samyang 14mm/2.8, starting with the ceiling: 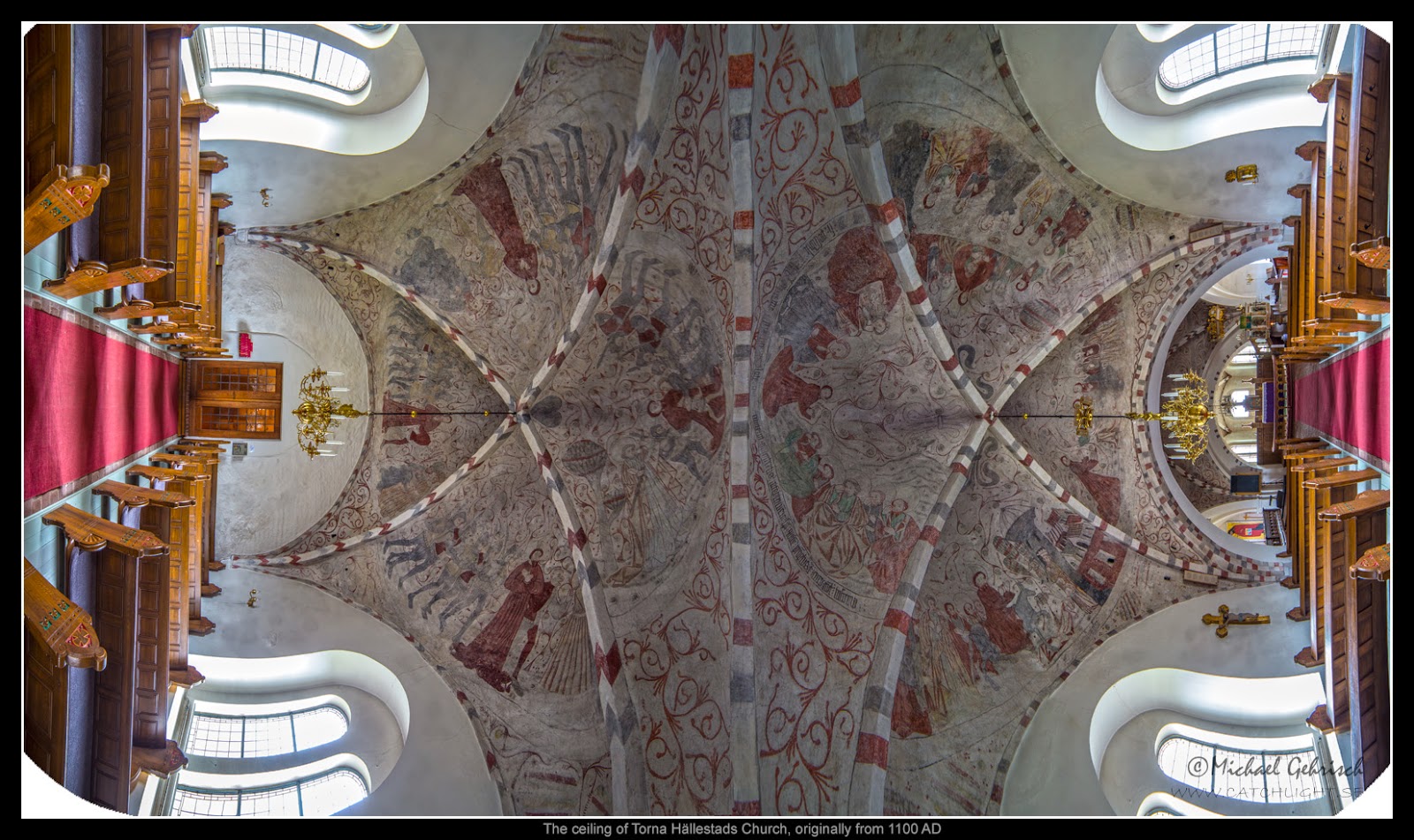 Ideally you should now hold your computer monitor or at least your iPad over your head to get the proper effect.

Moving on to the crossing of the transept I shot the 360 degree panorama (26 shots) you see below. There is some HDR processing to be able to recover both the shadows and highlights since it was a bit dark in the middle of the church, but with bright light from the windows.

And finally moving to the transept I shot the 210 degree panorama below which shows a bit more ceiling detail. 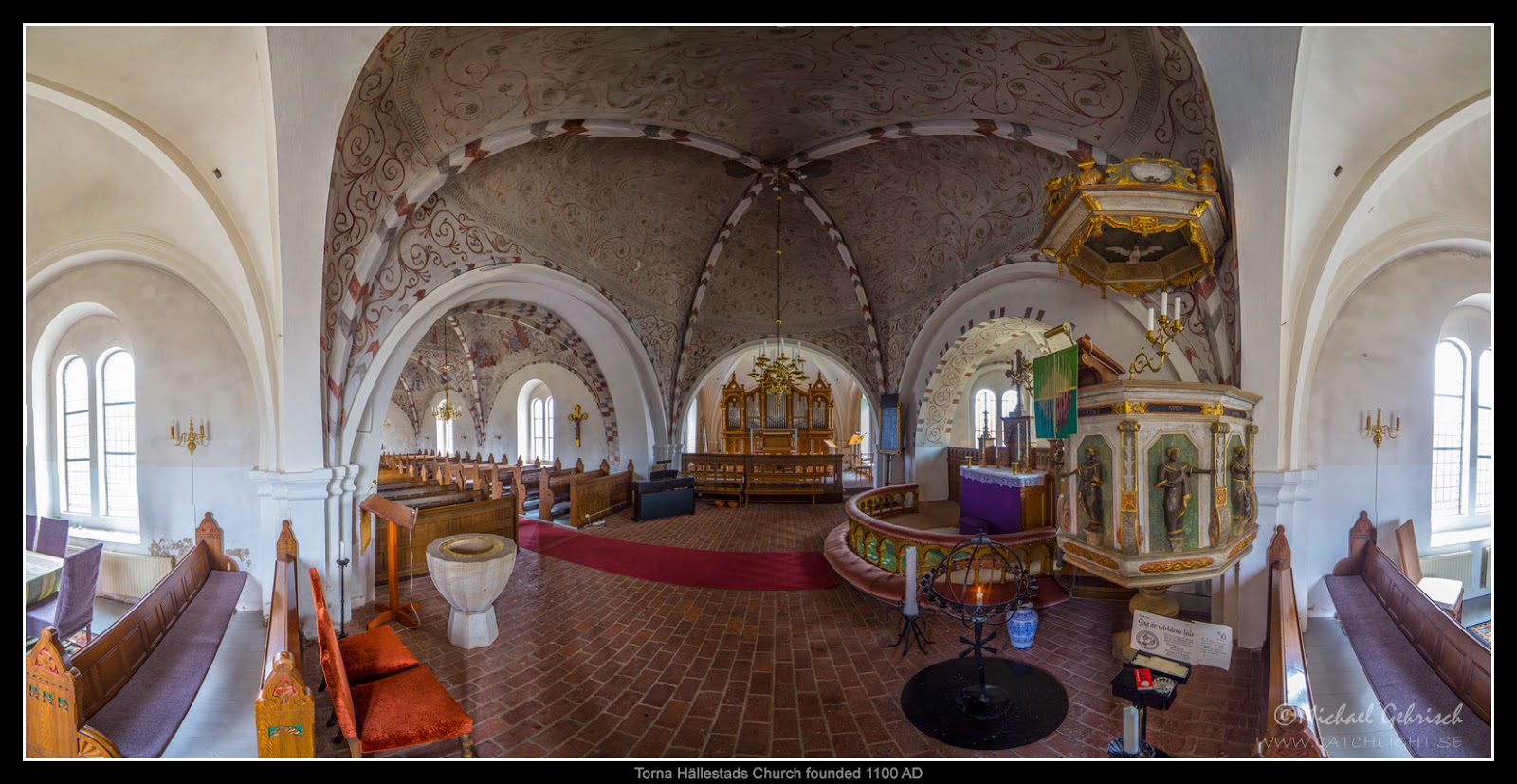 Satisfied with my one hour visit, when not a single person had entered the church I took a look at the exterior of the church which contains three rune stones in the wall including the one below. Originating from circa 980 AD and probably commemorating the battle of Fyrisvallarna, outside Uppsala. In total there are three runestones in the church walls. Interestingly the one which should be vertical is horizontal and the one which should be horizontal is vertical

While it might not be fair to compare this to the Sistine Chapel, considering that people are willing to travel thousands of miles and spend enormous amounts of money to visit Rome, Torna Hällestad Church deserves a good deal more attention from both Swedes and visitors, so the next time we have visitors we will definitely make a stop here.
Posted by Unknown at 5:44 PM 2 comments:

Even though I already had 2400 pictures of golden eagles which I was really happy with, when I got the opportunity to join Felix Heintzenberg on a 3 day trip to Norway to photograph more golden eagles, I just couldn't resist. So after landing in Oslo at 9:30 we picked up our 4wd rental car at 10.00 and started driving to Dalen in Telemark, a place so remote that my GPS said there are no streets there. Thanks to back up guidance from Felix we managed to find our guide's home at 3.00am. Jostein had said to give him a call when we got there, and a bit hesistantly we called and got... voicemail. Grrrrr. Now what? Sleep in the car for an hour and a half before getting up to head to the hide? We knocked on the door; carefully at first and then a little more insistenly. Still no answer. I checked the door, it was unlocked. "I'm going inside and sleeping on the couch". Felix followed me in and we were met by two extremely well behaved retrievers who refused to bark or leave there beds, but their tails were wagging so hard it was hard to ignore while trying to fall asleep. Jostein finally heard all our noise and came and greeted us. His phone had run out of juice without him noticing he explained sheepishly.
We tried to sleep a few more minutes, and at 4:30 we finally got up and had some breakfast before packing our gear and loading it on to Jostesin snowmobile and sled. Felix volunteered to ride on the sled with the gear as we started the 15 minute ride to the top of the mountain to the eagle hide. I kept looking back to make sure Felix was still there. Near the top of a very steep hill the snowmobile just started spinning its track, so we both had to jump off and walk the last 15 meters up the hill. The brisk wind and a lot of snow down the back of my neck woke had me fully awake and the all night drive seemed almost forgotten. We finally reached the hide, loaded in our gear and hurried to get everything set up while it was still pitch black to avoid scaring off any eagles or ravens that might be able to see us. We had two cameras and lenses each, and once they were in place, pointing out of the hide, they could not be removed until it was dark to avoid scaring the eagles. 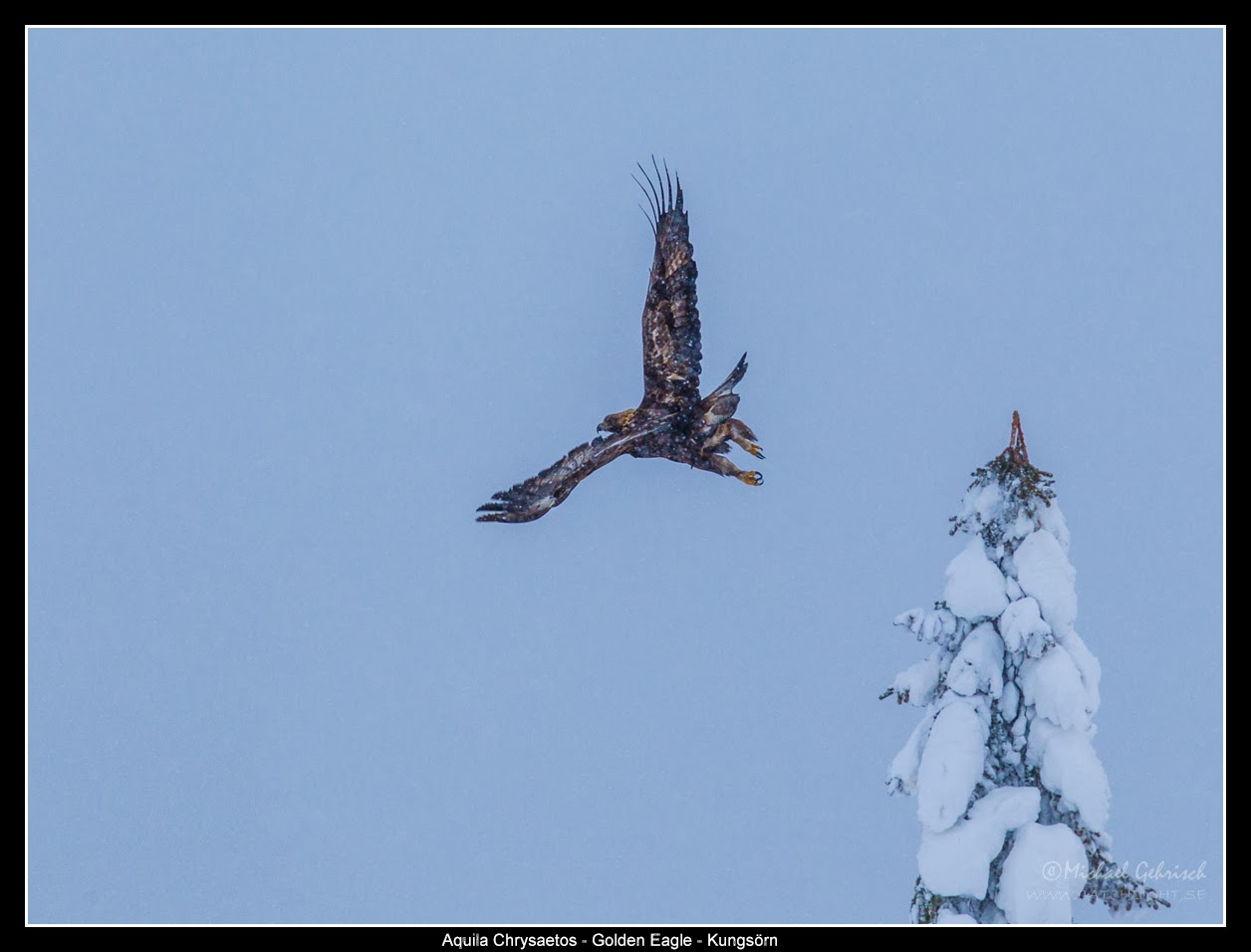 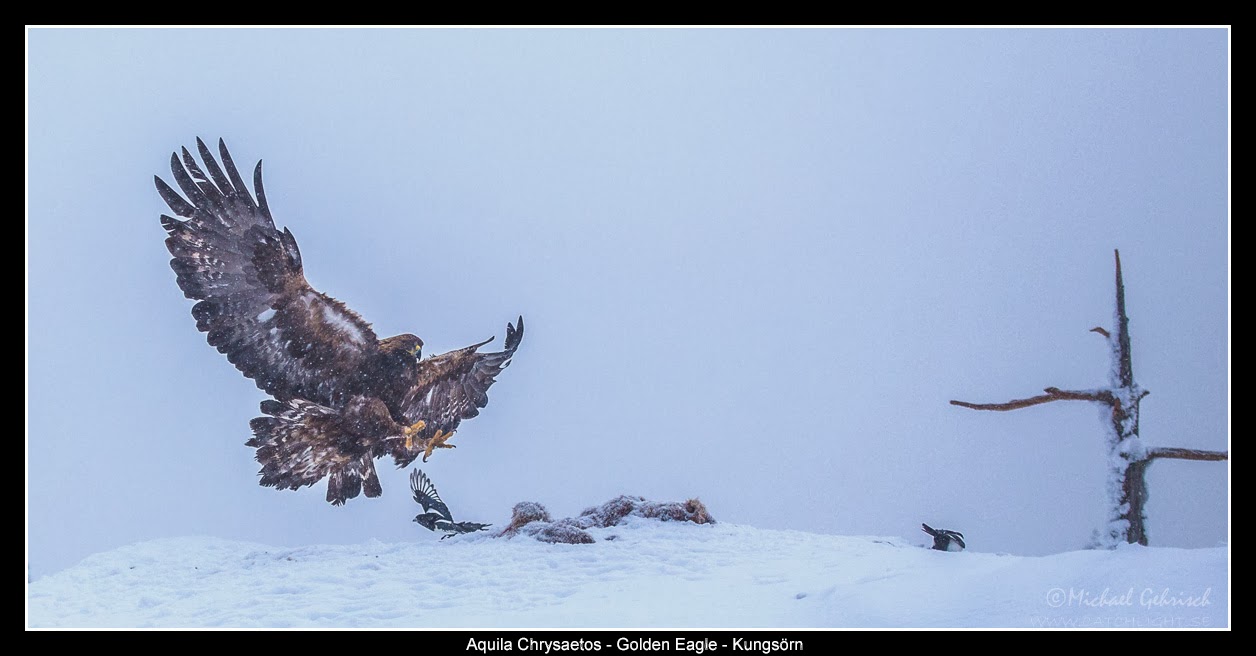 At 8:30 there was finally enough light to being to photograph, but so far only the ravens were to be seen, and care must be taken not to scare them. They are a sign to the eagles that everything is safe. Finally at 9:00 the first eagle made a cautious approach and sat on a tree top at a safe distance, but they were cautious and only stayed a few seconds at a time. As the day wore on and it became afternoon the eagles came and left several times and extended their stays, Felix and I took turns napping between eagles visits. 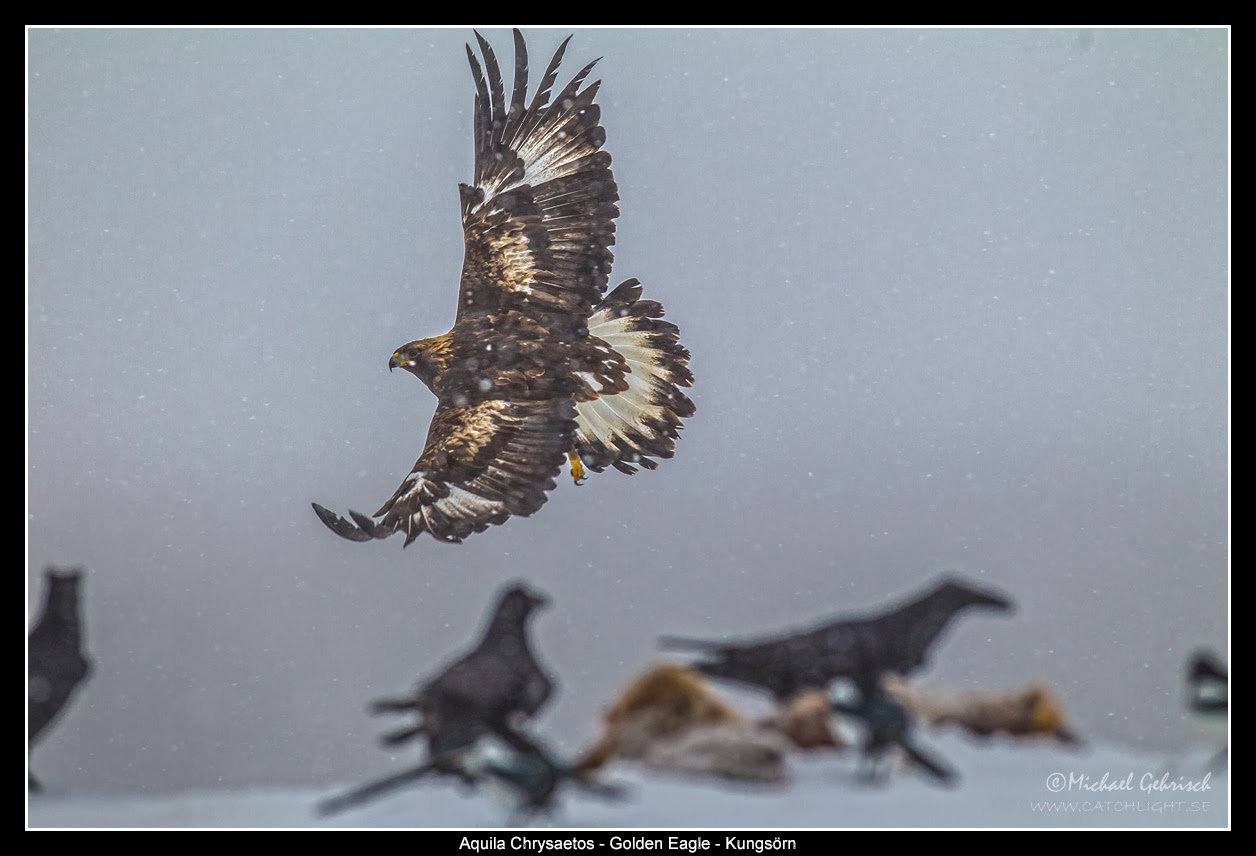 Most of the eagles fed individually and if a second eagle landed it usually meant there was going to be a fight. But there was one pair of eagles that was obviously a couple since they ate and flew together. In little more than a month the female would be sitting on their nest incubating two eggs that will hatch around the beginning of May.

The weather changed from snow to clear to fog to more snow and finally the light disappeared again at 5:00pm while a final eagle took a few last scraps of meat to tide him over until morning. The days result was 360 images, a few of which made the long day in the hide worthwhile. We packed up our gear and waited for Jostein and his snowmobile to take us back down the mountain.
By the time we got off the mountain, ate dinner and had a quick review of our pictures we were ready to pass out from lack of sleep. We made an early evening of ate and before we knew it the alarm was ringing to tell us it was 4:30am and time to get up. 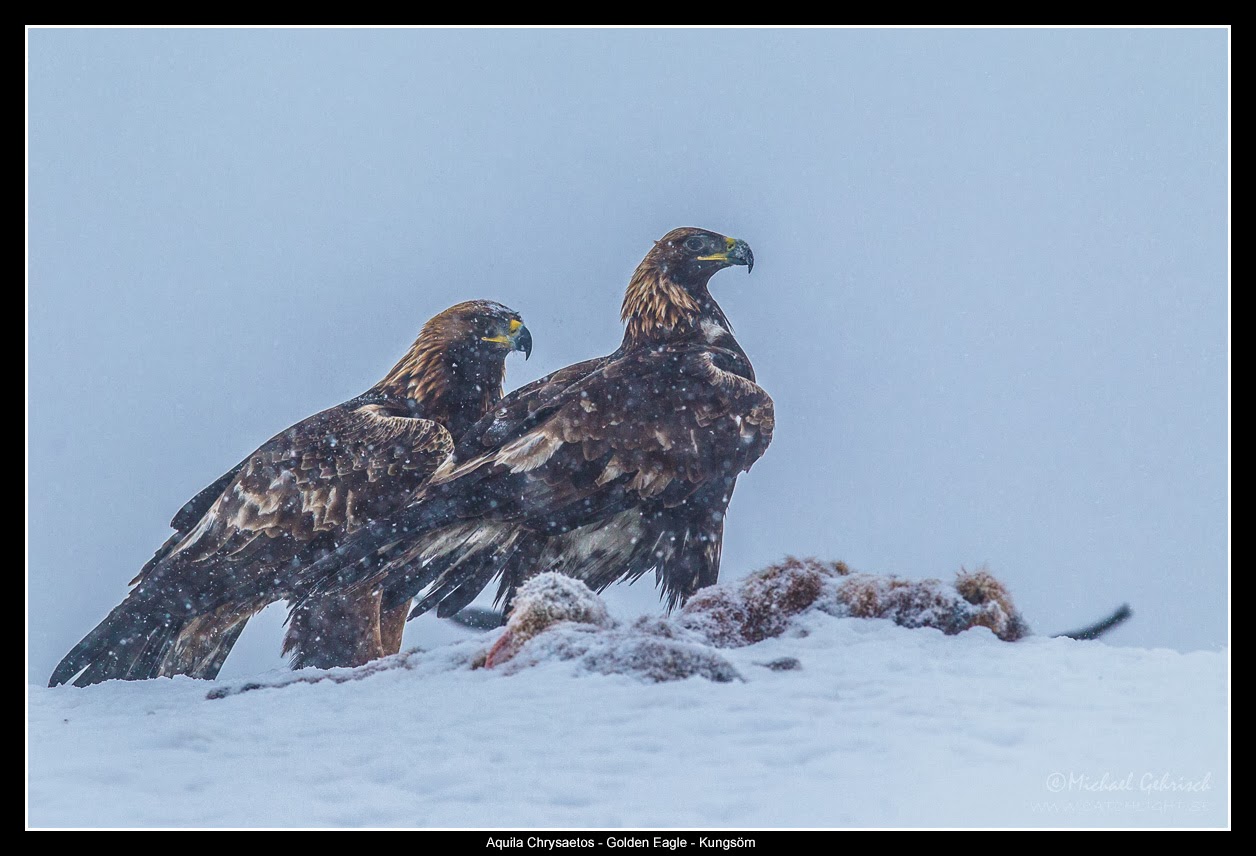 Our second and final day in the hide was much slower, fewer visits and poor light, but  nature is fickle and golden eagles show up on their own terms. Nonetheless I took 260 images and filmed the eagles as they ate 25 yards from us. We loaded our car with our gear and prepared for the the five hour drive back to Oslo. On the way we passed a wooden church and thanks to the full moon the sky still had a blue tint despite the fact that it was 11:00pm. We finally reached Oslo at 1:30 where we grabbed a few hours of sleep before catching a 7:00AM flight back to Copenhagen. 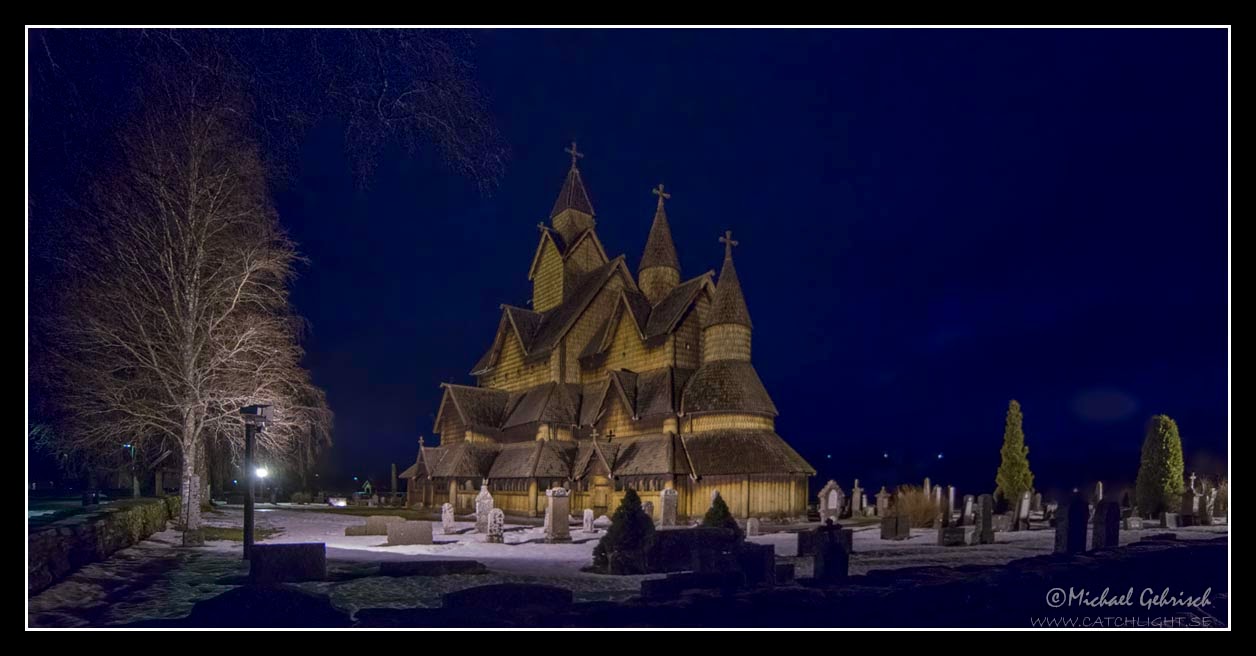 Two days in isolation with these majestic birds and a fantastic view; it can hardly be called a vacation, but it was definitely worth the time and effort! Nonetheless I was glad to get back to work and be able to sleep normal hours...