When I arrived in Sweden for a one year university exchange program in June 1987, I thought I knew what to expect. I had spent a lot time during the previous three years at UCSD hanging out with Swedish university students, and a Swedish/American couple that had moved to the US. I had taken Swedish in night school, and read all sorts of books and guides on Sweden. But despite all my preparation, I quickly discovered that Sweden was not at all as I had imagined. Everyone did speak Swedish, but beyond that most of my expectations were way off. So explaining my take on Swedish culture would take a long, long time, but let me give you a few glimpses...

I have begun to suspect that there is a battle raging within many Swedes.
They are overachievers with an inferiority complex. There is this thing called the "Jantelag"; (the law of Jante) that basically says "Don't think that you're anything special." And most Swedes follow that law, no matter how brilliant they are.
My Swedish friends in the US were very outgoing and always up for a party at the beach or a game of tennis. But in Sweden Swedes can be a bit shy; dying for someone to talk to, but can pretend to be asleep on a crowded bus for fear that someone might speak with them. The brother of a good friend didn't attend her 50th birthday celebration because it was basically mingling while having dinner and drinks . In Sweden they do sit down dinners with assigned seating. (And by the way, they have song books at dinner parties and sing "My Bonny Lies Over the Ocean", in case they don't have anything to talk about.)

Swedes are efficient and practical to a fault; I was walking in Lund with Kristian a friend from the University when he ran into a friend of his and they exchanged greetings and spoke briefly. All the while I was waiting for him to introduce me, thinking, it will come any second. And then they said goodbye and his friend went on his way. I asked Kristian why he hadn't introduced me and he said "Oh well you're never going to see him again..."
Swedes have among the longest life-spans in the world, a beautiful country with public access to virtually all land (even private), outstanding socialized medicine (speaking from experience as the father of a 19 year old asthma sufferer), and empty freeways (with the exception of downtown Stockholm and Gothenburg) that the rest of the world dreams about. Yet they are convinced that life is better Denmark, Germany, US, UK, Thailand, well almost anywhere else...


Swedes are good at planning. They fill their calendars months in advance with dinners and lunches, meetings, trips and vacations, all the while they wish they could be spontaneous. If only they had the time.
You can't invite a Swede home for dinner without having known them for a while, in part because they're shy and would feel threatened and besides their calendar is full. But you can invite them for fika (coffee, tea, snacks etc).
My theory on the root cause for much of this is that children between 5 and 15 go through school with the same 20 or so classmates. Then when you're fifteen you go to gymnasium (high school) and spend the next four years with a slightly larger but equally stable group of classmates. And quite similar at university. So the Swedes are open to meeting new people at ages 5, 15, and 20. If you didn't get to know them at the designated ages you have an uphill battle ahead of you.
But sooner or later they warm up, and if all else fails give them a shot of aquavit :-) Take my wife, we were in the same university history class, and for three months I tried to make conversation and get her attention, but she was completely uninterested. As luck would have it with two weeks left before the end of the term she asked for help with an English essay, "No problem" I said, "But you have to go out with me". I made her stir-fry Chinese in her dorm kitchen and she was sold. The way to a woman's heart is through her stomach...

So it would be close to impossible to make you understand what I have experienced, but I will try to give you a glimpse through a few pictures that have some symbolic value for my encounter with Sweden and Swedes...


This is the group of students from the University of California that I came to Sweden with in 1987. None of us knew you had to take off your shoes when you entered a Swedish home. Some of us still didn't get it when we returned to the US. 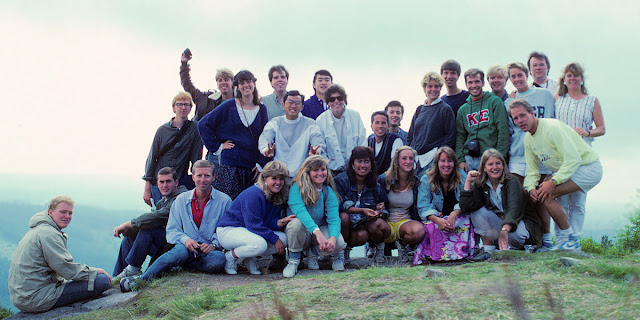 July in Abisko (above the arctic circle) 1987, the land of the midnight sun. What's wrong with this picture?
You might say the snow, no sun, looks cold. Well that's the way it is in Northern Sweden even in the middle of the summer. But a Swede will look at his picture and immediately spot that these must be four foreigners or complete amateurs. NOBODY in Sweden goes to Norrland (the Swedish arctic) without gummistövlar (rubber boots, wellingtons), shell pants, a parka and walking poles. And for good reason I might add, we had to wring the ice water out of our socks numerous times during our 10 mile hike in the snow and fog. But we lived to tell about it :-) Southern California boy that I am, I still wear sandals even in the winter. 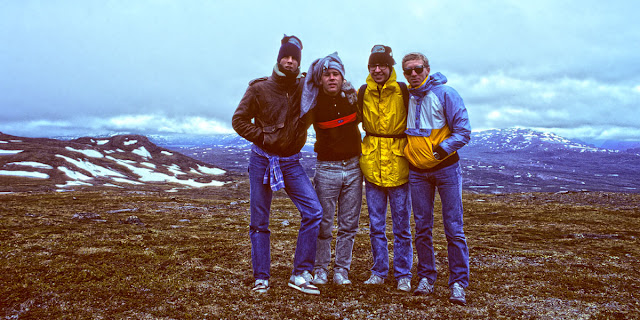 Petroglyphs at Tanums Hede Sweden has been inhabited by some pretty good artists all the back to about 1800BC. Every fisherman's dream. Sweden has some great salmon fishing and I have spent at least 50 days and 15000kr ($2000USD) fishing in the Mörrum River with only one 3 pound salmon to show for it. But Camilla Hedlund is one of Sweden's more accomplished fly-fishers, and has landed countless salmon in salmon rivers across Scandinavia. I gave up and bought a boat. It's uncrowded and beautiful. The archipelagos around both Stockholm and Gothenburg have fabulous scenery where you can be completely alone just minutes from the largest cities in Sweden. Swedes have a Lutheran work ethic, but they're not very religious, at least they don't go to church very often. Swedes are all about being practical and rational. This sometimes clashes with other cultures where small talk and socializing are the openers before getting down to business. The Swedish EU delegation recently figured out (after 15 years in the EU) that they were missing a lot of negotiations that were going on in the restaurants of Brussels during the evenings. The Swedes had been going home to get a good nights sleep.

Ribergsborgs Kallbadhus in Malmö. Built in 1898, the cold water bath, (all the way at the end of the pier) on the open ocean, open all year round. Swedes will take the plunge into the icy waters before taking a bastu (sauna). There are separate sides for men and women in case you want to swim in the nude. While Swedes are VERY open about sexuality on a political and public level, the same is not true on a private level. They will however tell you they have to pee even at an exclusive dinner and restaurant. No restrooms in Sweden, here we have toilets...

Industry and agriculture is what this Sweden's welfare state was built on, but recently a lot of industries are being sold to foreign investors and in many cases shut down. I'm not sure anybody has figured out what Sweden will live on in the future. Maybe we can become au-pairs for the Chinese? The back streets of Lund are charming and give a glimpse into how life and cities looked hundreds of years ago, sans bicycle...

Southern Sweden has traded hands between Denmark and Sweden several times since the Vikings ruled, and the Swedish dialect in Southern Sweden is not easily understood by Swedes North of the region of Scania. In fact most Scanians have a greater affection for Denmark than for Stockholm and Stockholmers who are sometimes called "08s" referring to the telephone prefix for Stockholm. But in Southern Sweden we gladly travel to Copenhagen which is a mere thirty minutes away. I still get a lot of questions from Swedes on how I could leave Southern California, so I show people this picture. "Oh", they say understandingly "you love the Swedish ice cream." 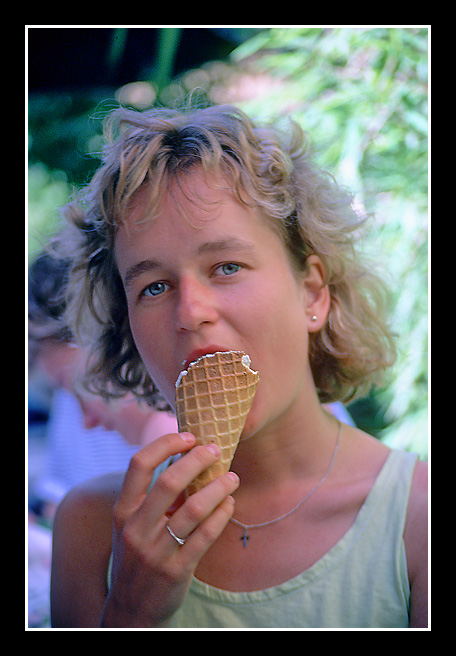 For more of my pictures of Sweden see:

http://www.pbase.com/kingfisher/sweden
Posted by Unknown at 10:25 PM