During our 8 day bicycling tour of Mallorca we were constantly awestruck by the beautiful countryside we were passing through, and I would often make a mental note of where we had been and what we had seen so I could make a new visit to take some pictures.

Although Palma de Mallorca and Alcúdia both resemble typical tourist destinations with countless hotels packed tightly along the beach and all the expected souvenir shops and tourist traps, this is not the case in any other Mallorcan city or village. In every village we passed through we were met by charming scenes of everyday life that could have taken place 50 years ago. Little old ladies gossiping in front of their flats, children on their way to school, men enjoying an espresso at the local espresso bar for 1 euro, and small boutiques with locals and the occassional tourist.

The exception is the town squares, usually centered around the village church; they look deceptively laid back and quaint in the early morning. But at lunch time it is standing room only as the entire square is packed with bicycles and bicyclists in their brightly colored club uniforms and the waiters and waitresses scurry between tables taking and delivering orders. By 13:30 the cyclists are on the road again and life on the village square returns to normal.

One of the many charming villages we encountered is Valldemossa, and although it is named in guidebooks as the most beautiful village on Mallorca, it would be unfair to say that it was much different from any one of a dozen villages we passed through; it is however on the road to Sa Calobra which was one of our destinations for the day, and that put us in Valldemossa in time for a mid-morning espresso and a look around the center.

As we approached the village via a winding road we stopped on a private driveway to get an overview of the village. There are few places to stop on the narrow roads of Mallorca, and many times we were not able to stop due to traffic and/or bicyclists. Early morning is the best time, before the cyclists take over the roads. 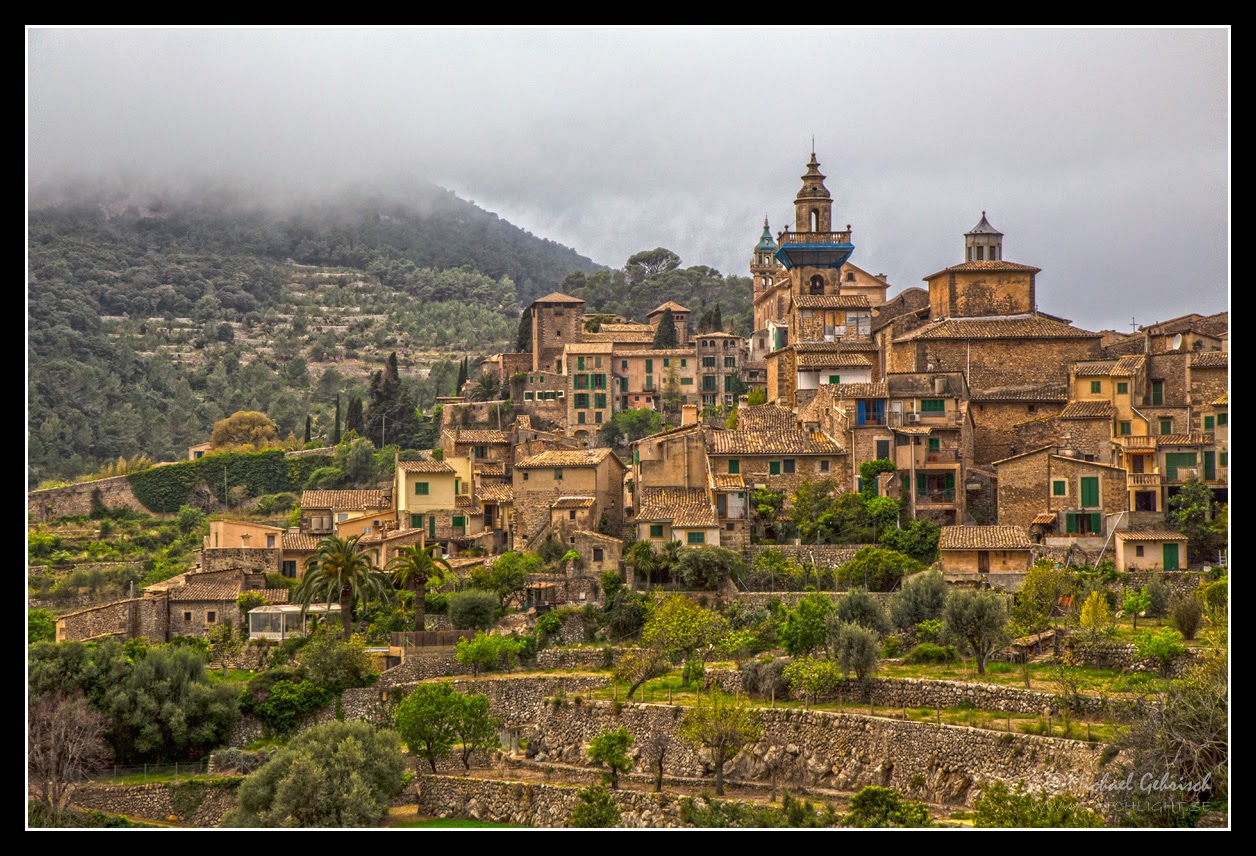 Once in the village we set off on foot looking for the main square, which led us to the highest point where the cathedral is located. 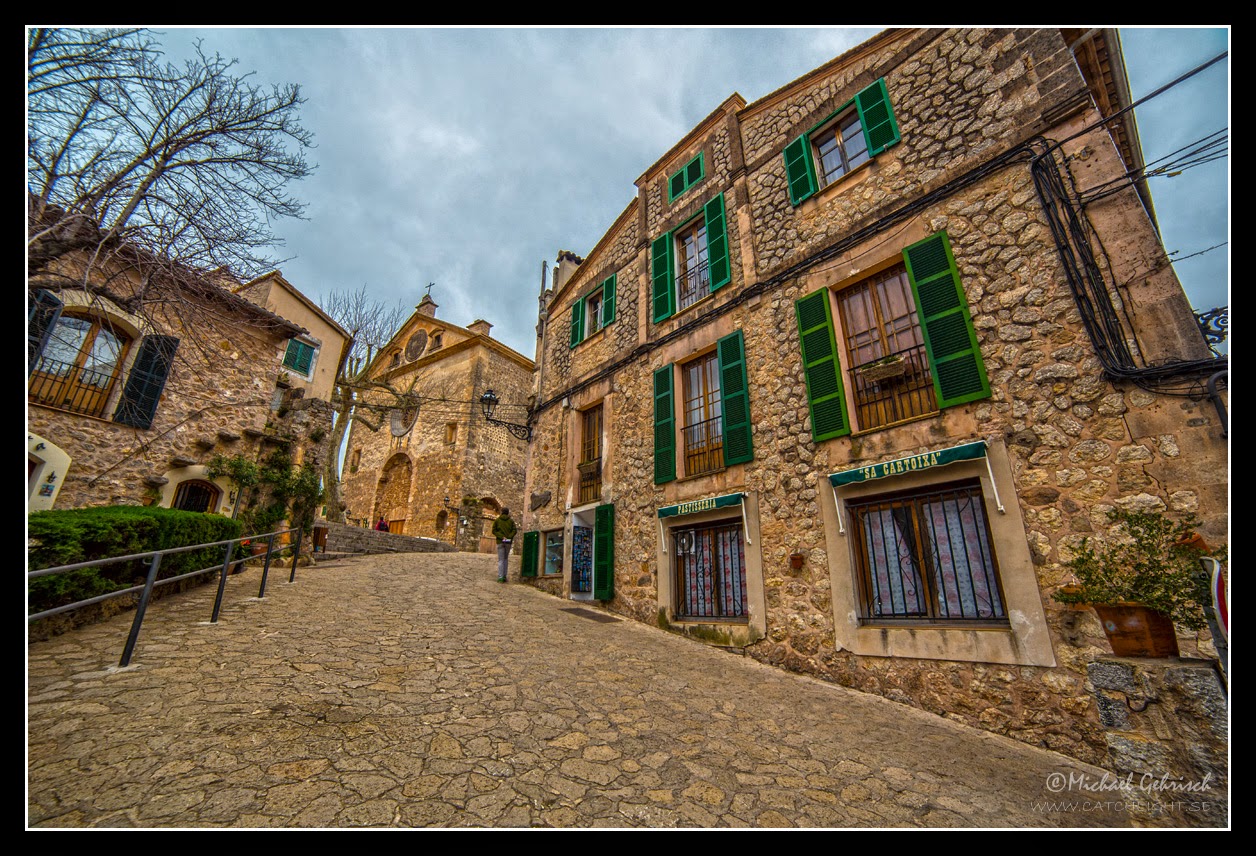 While my cycling colleague Olof Hagander studied the guidebook and looked for an open café where we could enjoy an espresso  I photographed the square and then took a tour of the cathedral and the attached museum. 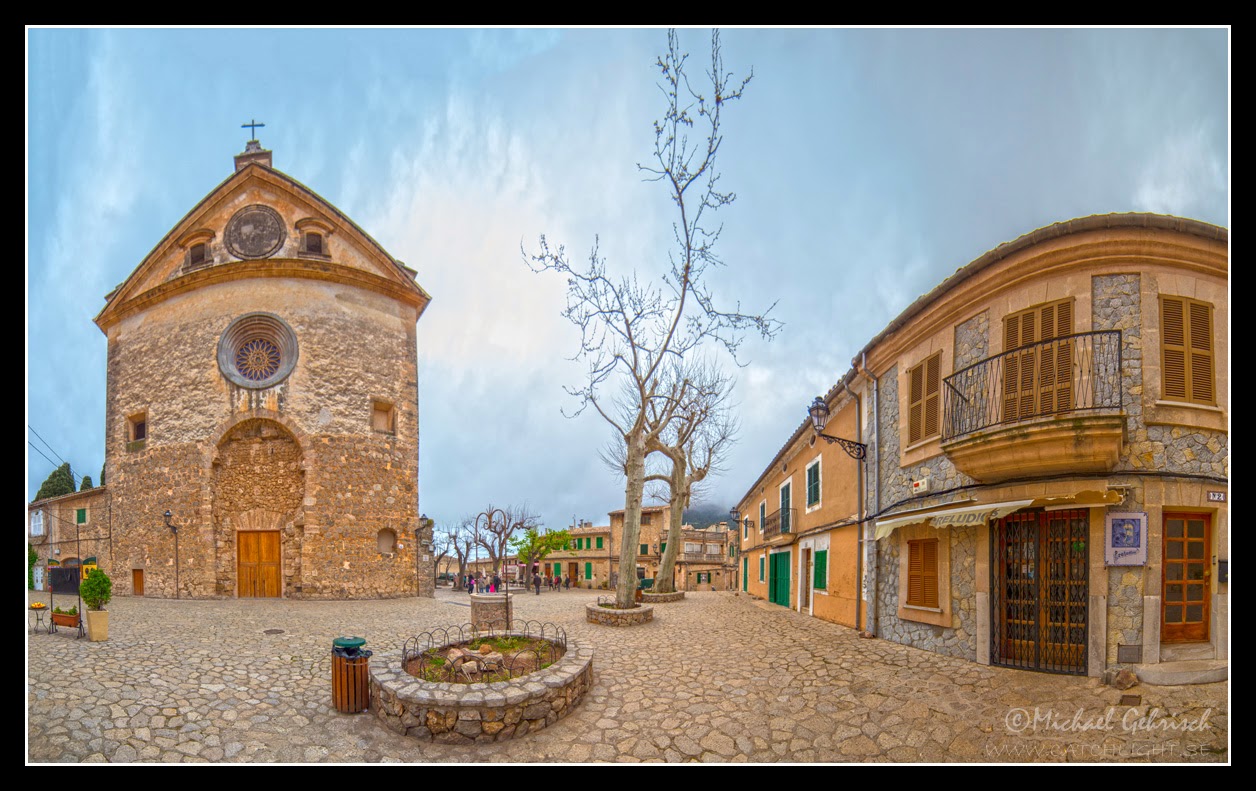 The church (above on the left) opens for visitors at 10:00 and a tour group of fifty Germans was ahead of me, so it was impossible to see or photograph anything in the cathedral when the doors were opened. Seeing my dilemma a museum attendant suggested  I start at the far end of the museum and work my way back to the cathedral completely avoiding the German invasion. Great idea... 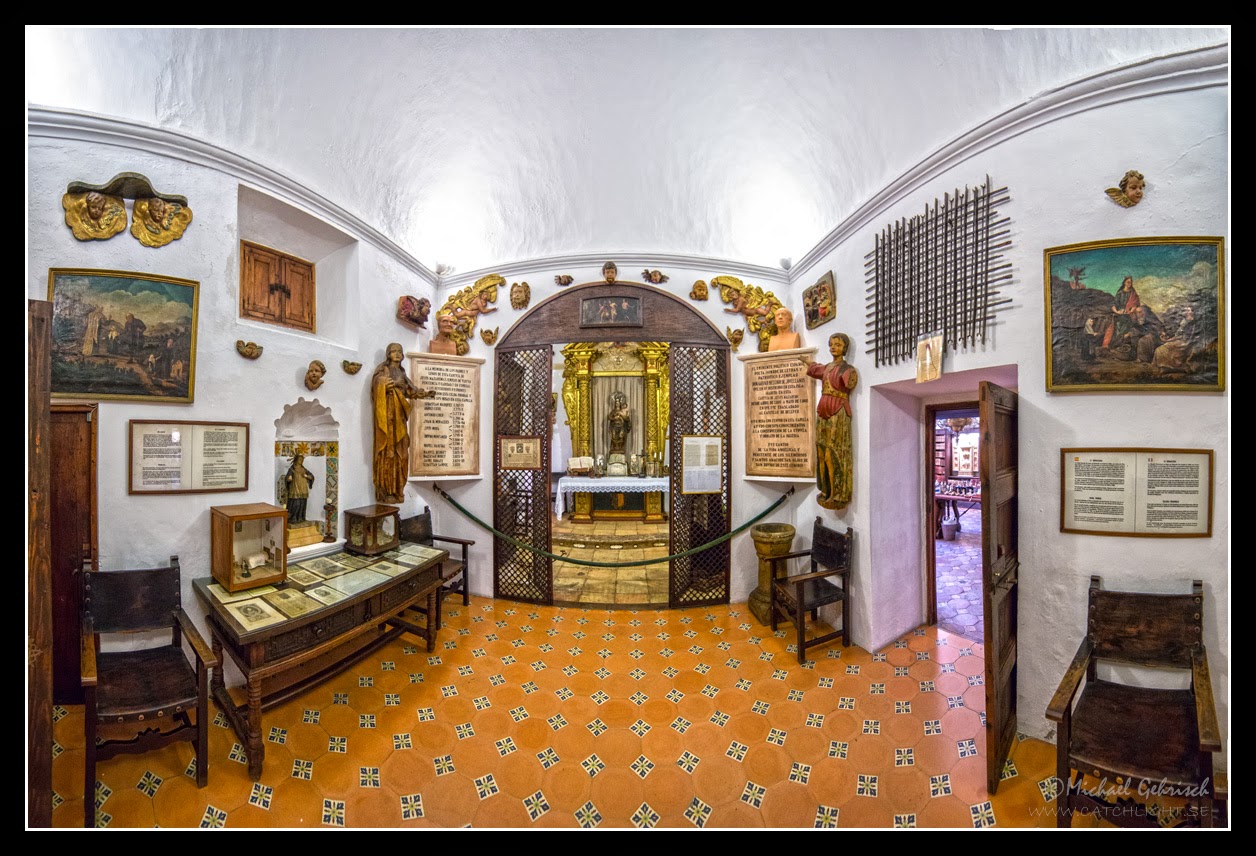 The museum contains the various chambers of the monastery as they were used hundreds of years ago, including the pharmacy and the Celda Prioral (the Prior's cell) above and below. 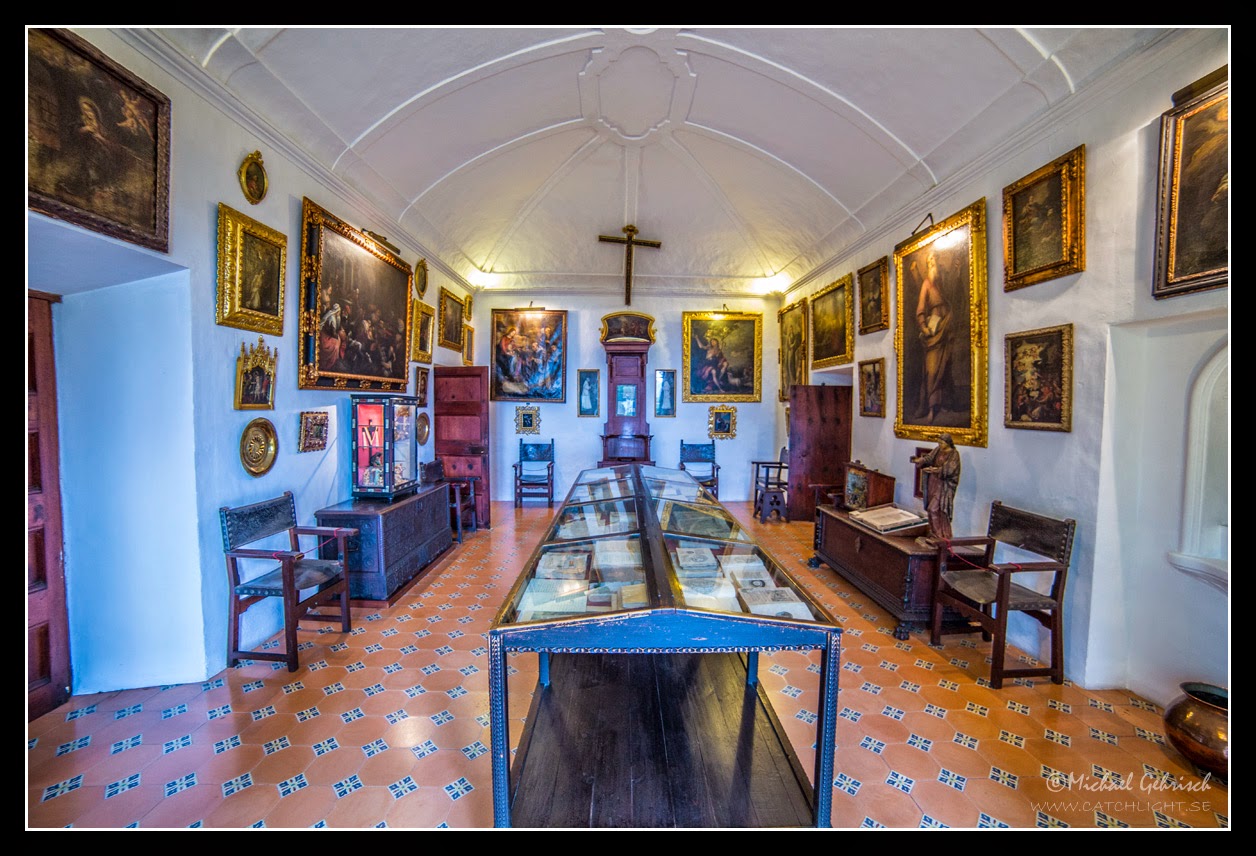 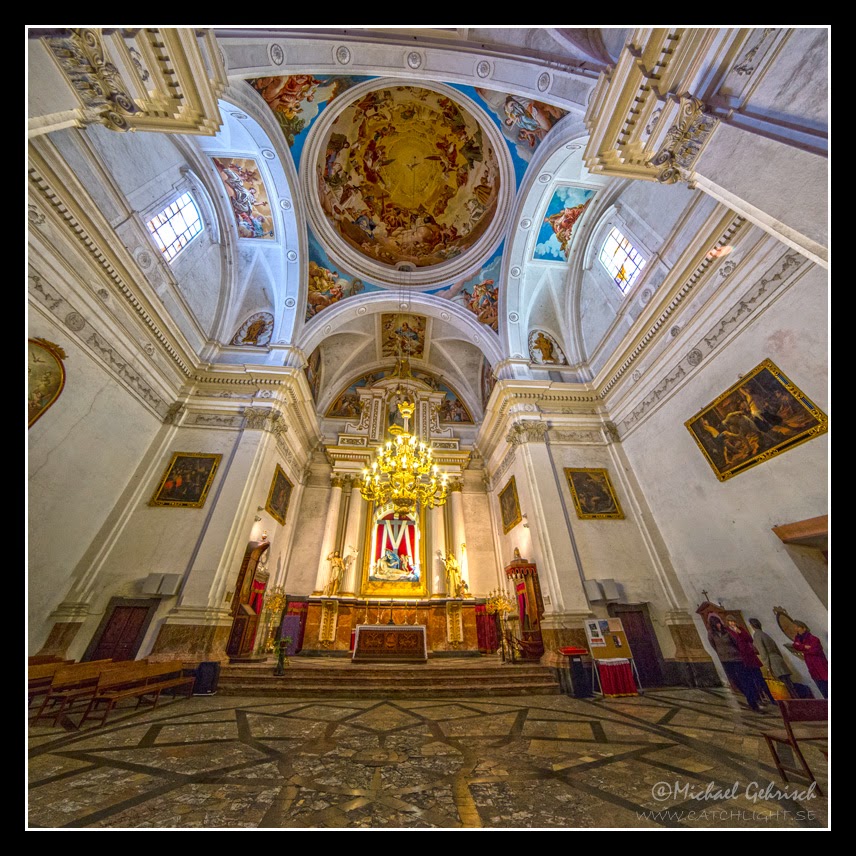 Back on the street Olof found a small boutique where he stopped to buy some plums. The queue system was unique to say the least. There were only a couple of customers in the shop when we came in and Olof got in line with his small bag of plums. The owner took several minutes with each of the two customers ahead of Olof, mostly small talk I suspect since no additional products were purchased. As Olof got to the front of the queue the owner smiled and said, "Just one moment please" and proceeded to let another customer (where did she come from?) step in front of Olof and pay (which also took a couple of minutes). Once more at the front of the queue Olof was once again ready to pay, but once more the owner said pleasantly "Just one moment", and took yet another local customer ahead of Olof. Maybe it was just their way of maintaining the small town atmosphere, taking care of their friends, relatives and repeat customers first; tourists at best only buy plums for a couple of euros... 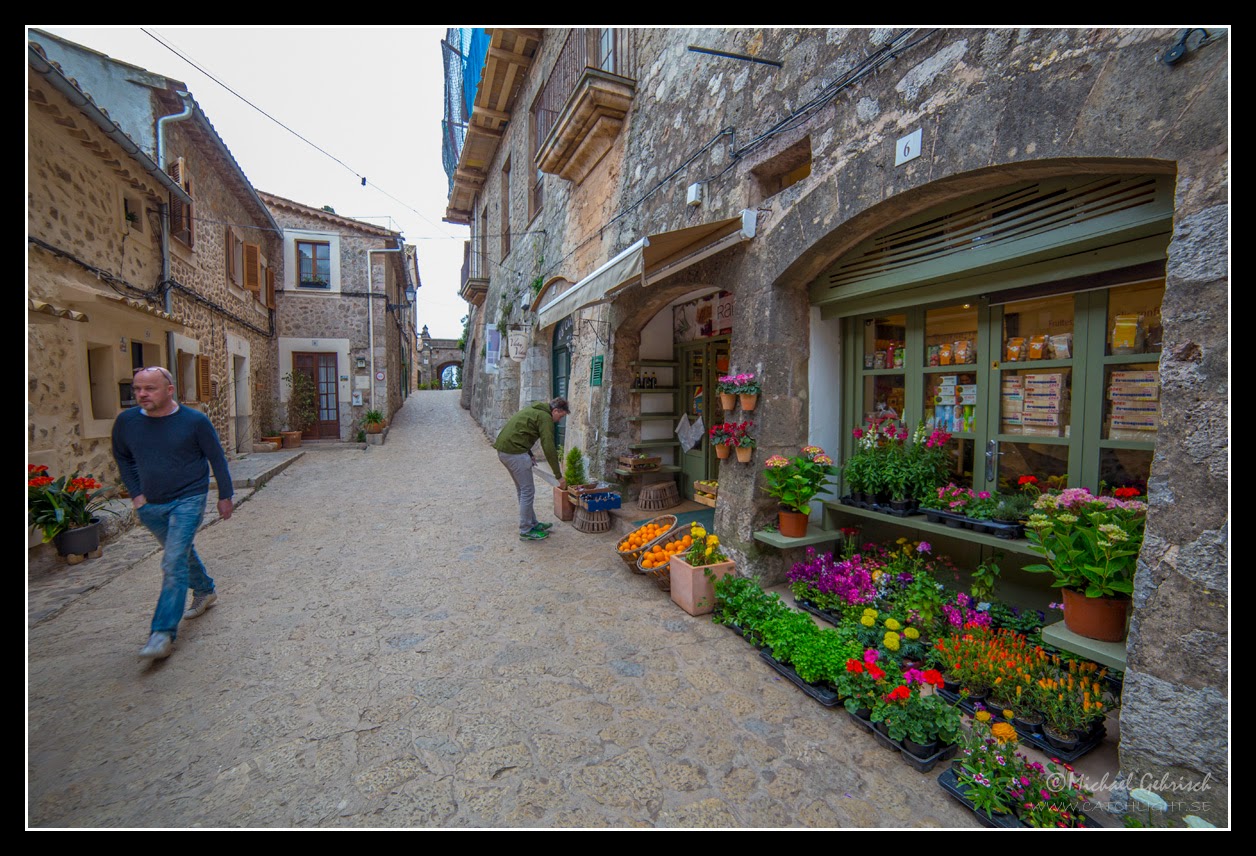 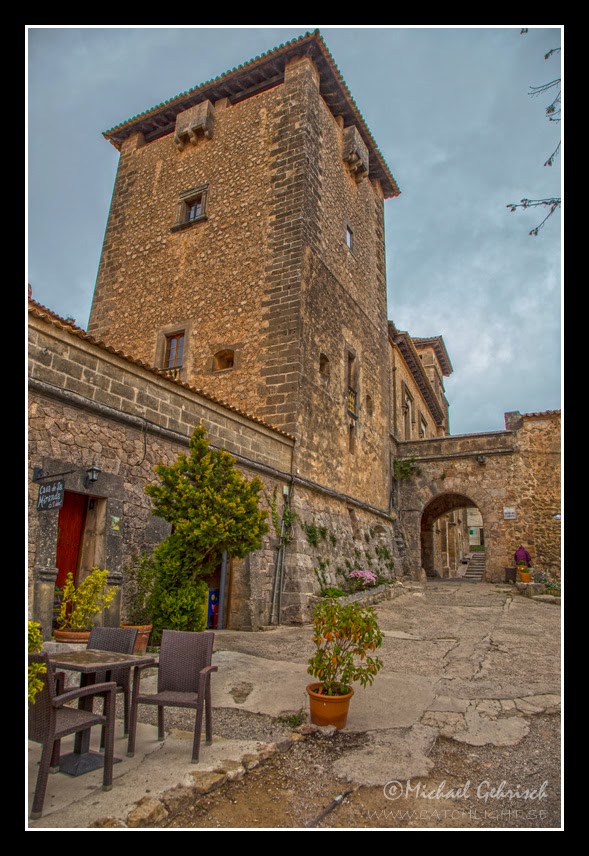 Exploring the back streets around the square we found a restaurant that was not yet opened, but their terrace had a nice view of the valley below., where we took a a final shot of Valldemossa before continuing our trip to Sa Calobra. 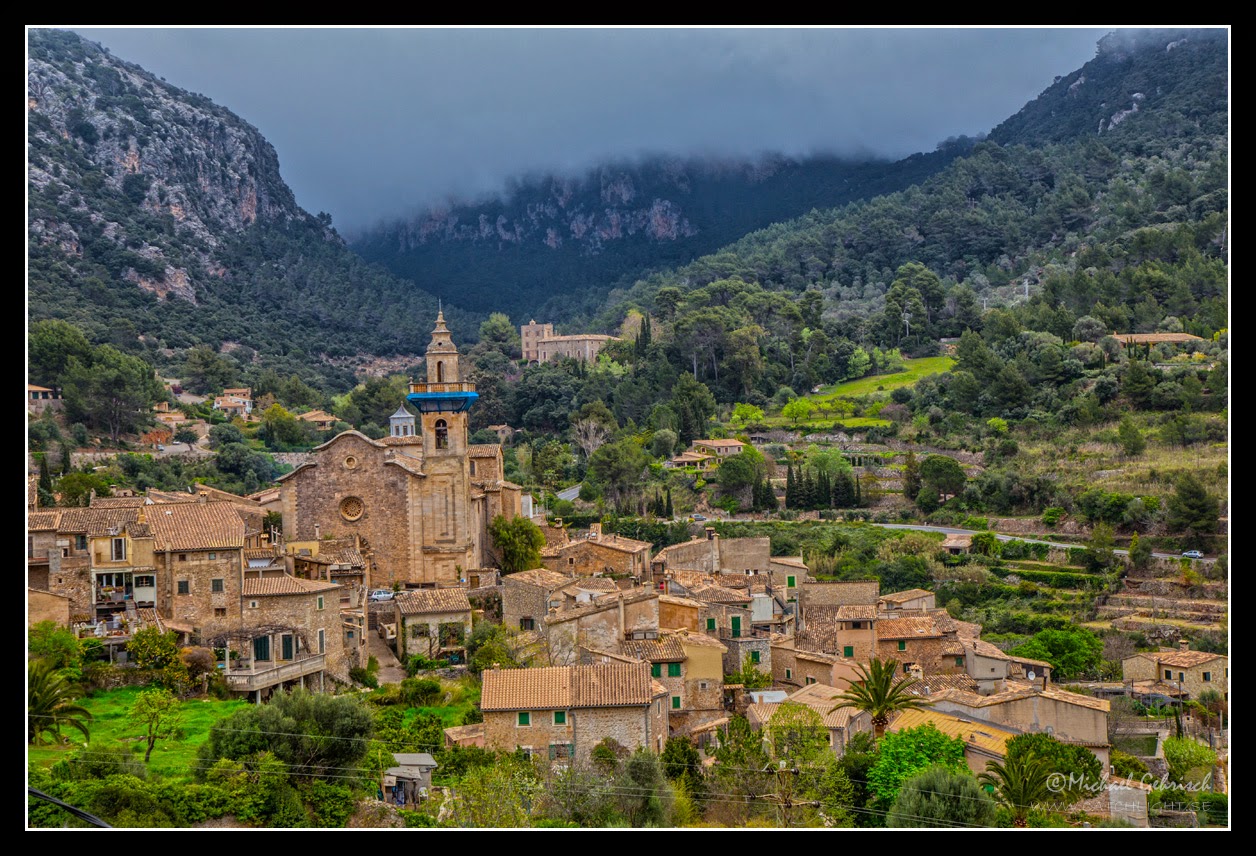 Photographing in the narrow streets and confined spaces of old villages can be a challenge, the best results require a wide angle lens. I used a combination of the full-frame Canon 6D + Samyang 14mm and the Canon 24-105L, but the Canon 17-40 would have been a good alternative. And if it's still too tight, make a multi-shot panorama image, the image of the town square above was made with 13 shots in portrait orientation with the Samyang 14mm. Just remember to shoot in manual mode to ensure the same exposure on all images, and allow about 50% overlap on each image. Photoshop CS and Photoshop elements have a great tool to automagically merge your multiple images into a single shot. It's best with a tripod, but even hand held gives good results if you are careful about keeping the shots level.