4AM arrived quickly. No doubt because I had left the bedroom window open on our fifth floor room and was up half the night trying to get rid of our uninvited guests. Later I discovered that our room had air conditioning, which avoided further blood-letting. Anyway, happy 50th birthday Lena, this will be a day to remember... Lena is not a morning person, so I think she suffered more by the 4AM wake-up call than I did from the mosquitoes and lack of sleep.

We met Arved Gintenreiter by the columns on the Piazza San Marco at 4:45. We spent about 10 seconds on introductions because the night sky was disappearing quickly. Arved assisted Johan while I quickly set up for a panorama shot of the piazza capturing the contrast between the cobalt night sky and the illuminated piazza which was now completely deserted.

The night sky was quickly disappearing and we hurried to take  different shots on the piazza. When we finished I made another effort at the full moon disappearing behind the Basilica Santa Maria, but it was a lost cause. I overexposed the moon which was now too low to make the composition interesting, and missed the focus on the basilica since I had used manual focus earlier. But what are you going to do? I will pretend I was focusing on the gondolas and the Basilica is the background...

We took a few more shots on the piazza and ended our first session at 5:50 as the sun began to light up the basilica.


We took a quick coffee break at one of the few cafés open at this time of morning before starting our next session, where Arved taught us some very interesting lessons about using the play between light and dark. Knowing the locations and how to time the shots with the sun's position, Arved led us to a half a dozen interesting spots all the while sharing the history of Venice and the places we were seeing.

The shot below was unplanned; just a cat in a window at 7:30 in the morning. This was the only good shot before a scowling old man opened the window to see what what was going on outside. He obviously hadn't had his coffee yet. We finished our morning session and agreed to meet Arved again at 5:45PM. In the meantime we went back to our hotel room and collapsed for a couple of hours before lunch. At 12.00 we tracked down one of the few restaurants that advertised having gluten free pizza for Johan. A poor choice in hindsight, a half sized pizza at twice the price... oh well, YOLO...

So now we were back in the tourist Venice as the once empty streets and alleys quickly filled. I'm always a sucker for a view, and since the cathedral on the piazza did not allow photography I suggested we take the elevator ride to the top of the Campanile which provided a fantastic view of Venice. It's not so exciting photographically, no contours, and mostly roof tops, but at least there were a few clouds to make the sky a little more interesting.

An authentic venetian traffic jam. A tick in the box for the one day visitor to Venice. But do yourself a favor and find a gondola outside the main tourist zone. No queues, no traffic and a no tourists. 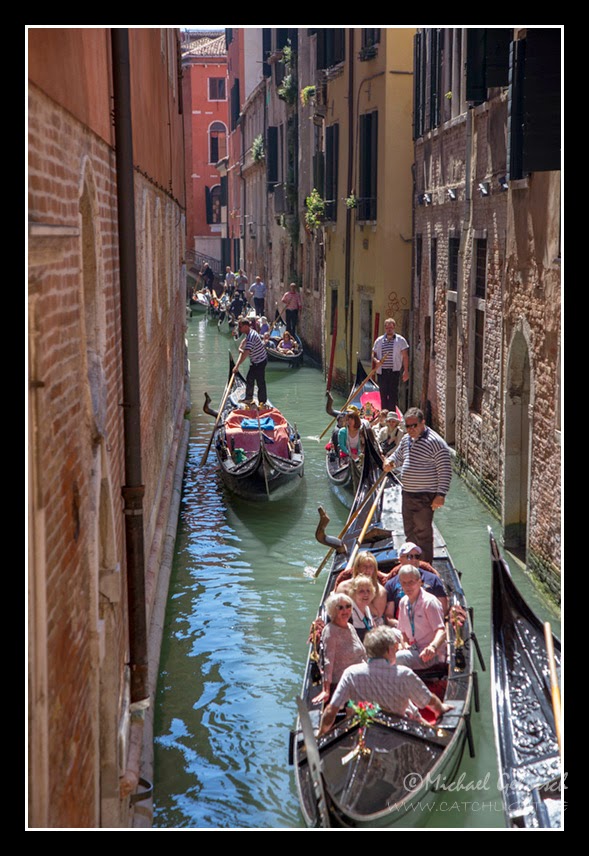 We met up with Arved again at 5:45 and spend another few hours walking to a dozen great photo sites, while Arved pointed to even more we should visit when the light was right or the sky was better, or we had more time. It's hard too choose from the many shots we took, and this shot is maybe a standard postcard shot, but I just love a good sunset...


1055 shots was the final count for the day, but I did a lot of bracketing, so maybe the true count is closer to 400. It was a memorable day, for all us and loaded with ideas on venues, restaurants we said farewell to Arved on the Piazza San Marco. We ended our evening enjoying a great dinner while listening to a live band just outside the window.