Three weeks and thousands of pictures during vacation in California, but no time to do any blogging. But now I feel compelled to do a post since these shots are from the 4th of July, and are probably of limited interest the rest of the year. One of my objectives with our summer visit to San Diego was to photograph the San Diego skyline with fireworks in the foreground, and after scouting the various vantage points we finally found a decent location and set up a couple of hours before the show.

Firework photography is relatively simple:
And now you need to experiment, if you simply leave the shutter open for thirty seconds the firework will become a runny mess, as it grows and then falls again. Some photographers expose for only a couple of seconds, but this leaves you with a properly exposed firework, but a very dark background. So one trick is to shoot in B mode and then have something to cover the lens with during the exposure, so that you can limit the firework exposure to a couple of seconds. So you might begin your exposure before a firework is even shot up, and then when the firework explodes you cover the lens after about 1-2 seconds. Keep the lens covered until the firework disappears and then uncover the lens allowing you to expose for the background or multiple fireworks. 30 seconds total uncovered exposure time works well for dark backgrounds.

Here are a few examples of my shots for the San Diego Big Bay Boom, and 18 minute computer driven pyrotechnics show that was shot up simultaneously on 4 floating barges in San Diego Harbor. The producers Garden State Fireworks more than made up for last years mishap where all the fireworks intended for a 16 minute show went off in 15 seconds


And here comes a shot before the fireworks. If you compare with the last firework photo you might notice that most of the city is obscured by smoke. So your best chance for good shots will be at the beginning of the fireworks. 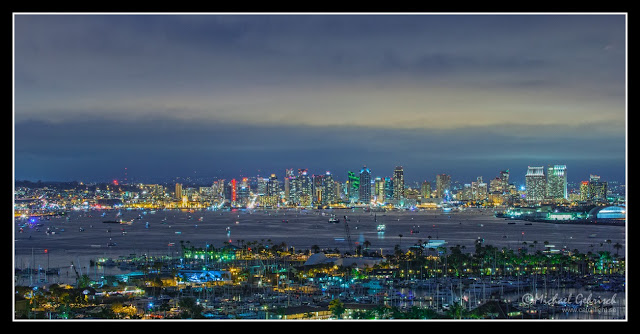 In these shots I used the 100-400 during the initial shots, before the smoke covered the city, then I used the 24-105 IS/L and used the entire range, to avoid having 20 firework shots with the same background.

And below we have an even earlier shot of the aircraft carrier the US Midway, a museum ship in San Diego harbor, which offered another great vantage point to view the fireworks, but without the city skyline as a background. 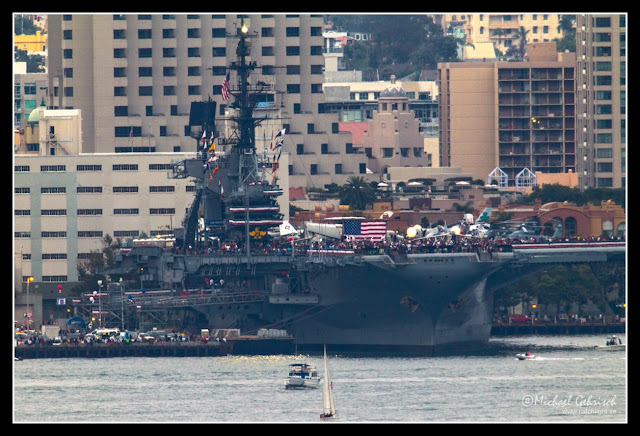